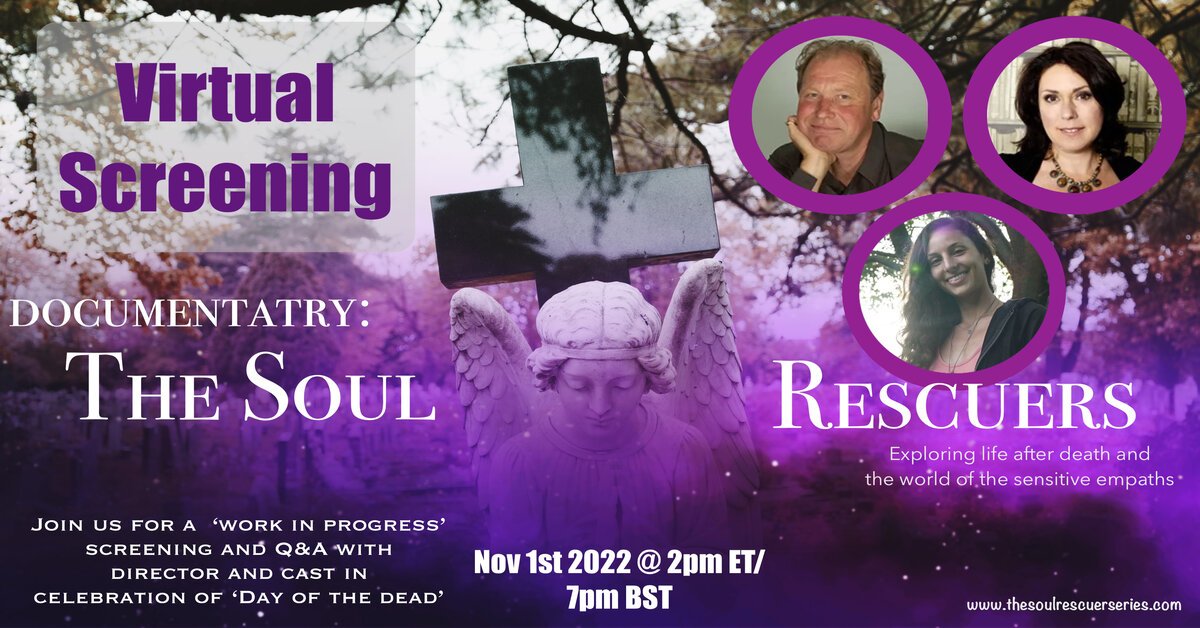 We will be screening an advance un-released 15 minuted clip of the “work in progress” of the spiritual documentary “The Soul Rescuers.”

It explores topics including:

This will be an interactive evening that will also feature a Q&A with the film director and a guided meditation by soul and ancestral healers Natalia and Terry O’Sullivan to celebrate this special day.

About The Soul Rescuers Documentary

Soul Rescuers is a spiritual documentary that explores the world of sensitive empaths who can tap into the spiritual dimensions and communicate with souls of the dead.

Tackling the most prevailing question of all time – “what happens when we die?”, the Soul Rescuers lifts the lid on the truth behind the myths, to reveal a world that we never thought was possible.

Based on the book “Soul Rescuers” (published by Hay House) by Natalia and Terry O’Sullivan, renown UK healers sought out for their work in soul and ancestral healing, this documentary takes us through their personal journeys and revelations of over 40 years of communicating and healing the souls of the dead.

The Soul Rescuers ultimate aim is to shed a new light on this topic and to encourage young sensitive empaths to pursue their gifts and abilities as healers in the world.

The film will not only enrich our lives in understanding consciousness, but fill in the missing piece to the puzzle of what our purpose is and why we are here.

How to Prepare For The Screening

Director – Desislava Kadra is a documentary filmmaker who combines films with spirituality
as a way to integrate higher wisdom into a modern day society. Her first short
documentary ‘Fighting for the Wild’ based in Peru, won 2 awards for best educational
documentary and has screened at a number of international film festivals. Having studied
with Natalia and Terry for a number of years and witnessed the healing power of the soul
rescue work, her goal is to educate people on life after death and to encourage young
sensitives to understand their uniqueness and pursue their gifts as a sensitive being.

Cast – Soul Rescuers is based on the work of Natalia and Terry O’Sullivan, Hay House
authors, who are are sought after for they work in soul and ancestral healing. For over 40
years, Terry’s pioneering work as a soul rescuer and a healer has taken him to places all
over the world, helping the living and dying, as well as working with the land and spirit
world of each place. In the film, he shares some of his most personal experiences that
shaped his path to where he is now. Natalia has practiced as a healer, psychic and
counsellor for over 25 years, specialising in ancestral healing and in the film she shares
some of her experiences of what it was like to grow as bridge between the dead and the
living.


If you like these events, please click here. This website is community supported by people like YOU who want to share positive, inspiring, good spiritual transformation with the world!
Tags: Ancestral Healing, Channeling, Mediumship, Natalia O'Sullivan, Soul Rescuers, Spiritual Growth, Terry O’Sullivan